An illustration showing the basic set-up for a household solar system with micro-inverters. The benefits brought by micro-inverters are making them increasingly popular. The reasons why are explained below.

The heart and brains of your rooftop solar system

If you are new to rooftop solar or do not have a background in the electrical trades then you probably have never heard of an inverter.

This nifty and sophisticated box of electronics and switches Is not about turning things upside down – rather its main jobs are transforming the raw energy from the sun into a usable form, making sure your system is working to the max and letting you measure what’s happening. 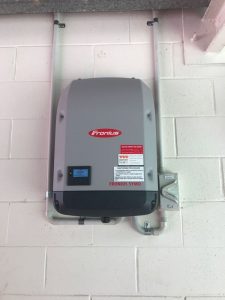 To put it more formally…

Inverters are responsible for:

That’s conversion of DC (direct current) electricity produced by the solar panelsto appliance friendly 240V 50 Hz AC (alternating current), the form of power we are all familiar with and can use within our home or export to the grid.

Reporting on your solar system’s performance – either on screen, via bluetooth or via the internet.

Each is designed for different situations and each has its own advantages and disadvantages.

A string inverter is connected to a series or “string” of solar panels. It converts incoming DC power to outgoing AC power from ALL connected panels as a whole.

A string converter is usually mounted on the wall a short distance away from your rooftop solar panels in a sheltered location – usually between the solar array and your electricity meter/switchboard.

This is the most common type of solar inverter for residential users and small to medium commercial solar systems in Australia. It is also the least costly.

For many commercial installations a series of string inverters typically will be used to cope with the higher number of panels.

String inverters are simple, proven and ideal if your roof is clear of any shading and your rooftop panels do not face in different directions – for example due to a gabled roof with different pitches and aspects.

If one part of your solar panels’ array has a different aspect and receives less sun then the output across your entire solar system may be degraded.

There also are limits on the maximum number of panels a string inverter can handle as well as compatibility issues between different types of solar panels, limiting expansion and panel replacement options.

These are reasons why micro solar inverters are becoming increasingly popular for household solar installations in Australia and elsewhere even though they cost more.

These issues are not so critical for commercial rooftop solar where a series of inverters will be linked to a string of solar panels. Any temporary point of failure is less significant as the power output of the rest of the system will not be degraded.

Micro-inverters are installed near or under each individual PV panel in your solar energy array.

Micro-inverters convert the DC electricity from your solar panels into usable AC electricity BEFORE IT LEAVES YOUR ROOF, with no need for a separate string inverter located at your switchboard.

The big advantage of micro inverters is that they cancel out the impact of partial shading and panel mismatch from either degradation or failure.

Because the DC-AC electricity conversion happens at each panel – there is no “bottleneck” when one panel’s output declines. If one panel is failing the others continue to function normally.

Micro-inverters also allow you to readily monitor the performance of your solar system. They make future expansion of your solar system or the replacement of individual PV panels easier meaning differring power class solar panels can readily be interchanged.

There are now many solar inverter manufacturers in the market but only a limited number stand out.

At Country Solar NT we only recommend world market leaders and innovators.

To be brutally blunt, low cost inverters of any type or brand are a potential nightmare and to be avoided – below are the brands we highly recommend;